Since the discovery of efficacious vaccines, widespread outbreaks of infectious diseases—hallmarks in the history of medicine and society—have become relatively rare occurrences in the United States and Japan. Thanks to numerous scientific and technological breakthroughs, measles, diphtheria, and rubella are now preventable, while highly debilitating or in some cases deadly scourges of polio and smallpox have been completely eradicated. Although such diseases are now under control, public health authorities continue to strive to ensure against new outbreaks of VPDs (vaccine preventable diseases) through education and the introduction of routine immunization programs. Universal consensus exists among health experts worldwide of the importance of vaccination. Nonetheless, even across countries in the same region, there are significant variations in terms of when, where, and what vaccines should be administered, which stem from each individual nation’s policy environment and history of disease. This essay considers some of the differences in two countries, the United States and Japan.

The recipients of the routine vaccines mentioned above are mainly infants and children. Through vaccination, their bodies develop immunity that will last, in most cases, a lifetime. However, not all vaccines offer such effective, long-term protection. Because viruses perpetually mutate, researchers must continue their efforts to develop new vaccines to combat them. One such example is the seasonal influenza vaccine. In this essay I highlight some observations I made during a recent sabbatical at Johns Hopkins University (JHU) in Baltimore, Maryland when I was affiliated with the Institute for the History of Medicine at the School of Medicine as a full-time faculty member from August 2018 to June 2019. The aim of this essay is to shed light on some of the salient differences in the vaccination practices in the United States and Japan through two observations: a mandatory flu vaccination program and provision of the flu vaccine at US drugstores. Through this essay, I hope to offer some insights as to how changes in regulatory policies affect vaccine practices in the United States and Japan.

My first observation of the differences in vaccination practices occurred shortly after I arrived at JHU. I received an email informing me of the university’s mandatory flu vaccine policy, implemented in 2012, following the recommendations of NVAC (National Vaccine Advisory Committee). According to the notification, JHU would begin administering flu vaccinations free of charge to the entire medical staff at a number of different locations. The message included deadlines for receiving vaccination as well as for submitting requests for a medical or religious exemption. As I discovered shortly after receiving my injection, those who had been vaccinated could receive visible evidence of coverage, a blue clip, to be attached to their identification badge. Though statistics are not posted on the JHU website, the vaccination compliance ratio appears to be high. During my stay, I never came across a single staff member who did not have a blue clip attached to his or her badge.

It should be pointed out that mandatory vaccination programs like this one—whether for the flu or other contagious diseases—are not a general norm in the United States. As in Japan, routine vaccination for children is recommended; moreover, mass inoculation programs are no longer conducted in schools. At the same time, coercive measures have been put in place to promote higher routine vaccination rates. For example, many states do not allow children to matriculate into the public school system without proof of vaccination or a medical exemption. This is one reason why some so-called ‘anti-vaxers’ (opponents of vaccination) opt to home-school their children and thus avoid the obligation to vaccinate. Other large institutions including the JHU hospital system and the US military require vaccination against certain diseases, based on risk factor assessments. The types of vaccines required differ according to the place of employment and exposure to disease. For example, JHU employees, who are in constant contact with the sick, receive a flu vaccination, while soldiers deployed to certain regions of the world are vaccinated against anthrax and yellow fever.

In the United States, the risk factor was the primary consideration for the government’s recommendation to implement mandatory flu vaccine programs at medical institutions such as JHU in 2012. This measure followed the 1984 the CDC (Center for Infectious Disease Control and Prevention) recommendation that all persons with a high risk of complications resulting from the flu be vaccinated, including persons over 65 years of age or nursing home residents over 60 years of age. In addition to risk assessment, economic factors such as the cost of absenteeism are also taken into consideration in the formulation of policies.

In Japan, on the other hand, mandatory vaccination flu vaccine programs such as the one at JHU do not exist, though some employers strongly encourage vaccination, mainly by providing financial incentives such as partial reimbursement. The policies of Japanese hospitals tend to reflect those prescribed in the Preventive Vaccine Law, the basis of all vaccine policy in Japan, which was first introduced in 1947 during the US occupation. Only recently have cost effectiveness analyses become factors in vaccine policy formulation.

Public health authorities in Japan have not always taken such a passive stance toward the flu vaccine. Moreover, policy changes are often influenced by public opinion. In the mid-1970s, Japan became the first nation to introduce a mass influenza vaccination program targeting children. In 1994, however, mounting skepticism regarding the efficacy of flu vaccine among some physicians and the general public influenced Japanese regulators’ decision to remove it from the Preventive Vaccine Law as a routine vaccine for children.

New developments occurred in the late 1990s, which would have a major impact on policy-making. Following outbreaks of influenza in 1997 and 1998 at Japanese nursing homes, claiming the lives of some 250 elderly residents, vaccination policies were reviewed. In 2001, the Preventive Vaccination Law was revised so as to include the influenza vaccination for persons over 65 years old as well as those between 60 and 64 years old who suffer from certain chronic conditions. As in the previous example, public awareness of vaccination intensified during the H1N1 outbreak in 2009. As a result, tourism declined in certain regions of the country or in cities with a particularly high ratio of cases, even after the flu season had ended.

The second observation I made was the large number of drugstores that offer the flu vaccine. For Americans, drugstores are roughly the equivalent of Japan’s ubiquitous convenience stores in terms of their high volume of customers. Like Japanese convenience stores, they are also generally open 24 hours a day, seven days a week. For the many shoppers who patronize them, drugstores are not only a convenient place to have their prescriptions filled. Customers can also make purchases of basic groceries such as milk as well as toiletries and other daily household products. Drugstores in the United States however serve an additional function as a place where customers can be vaccinated. Following the recommendations of US vaccine policy-makers in 1995, some states began allowing pharmacists to administer the flu vaccine upon completion of a short training course. Today all 50 US states permit pharmacists to vaccinate certain populations against the flu, and in some cases, other routine vaccines.

Though there are state-level variations, in general, the range of vaccines pharmacists are allowed to provide is on the rise. Indeed, some states even permit pharmacists to administer the HPV (human papillomavirus), hepatitis B, and pneumonia vaccines in drugstores. From the mid-1990s as a means of promoting better public health, US regulators have gradually broadened the scope pharmacists’ duties to allow them to perform certain medical interventions. By expanding their duties through the relaxation of regulations, public health authorities have allowed pharmacists to play a more direct role in the public health system.

In Japan, while the role of pharmacists has also been evolving in recent years, it is still limited primarily to dispensing medications and providing important information to patients such as contraindications. Unlike their American counterparts, however, they are not permitted to administer vaccines. There are numerous explanations for this divergence, one being Japan’s medical environment. Because of the relatively large network of neighborhood clinics, particularly in urban areas, and shorter waiting time to see a physician than in the United States, the introduction of policies to facilitate vaccination seems unlikely and unnecessary.

This essay has compared some of the differences in the vaccination practices in the United States and Japan. One message that it provides is public health policy-makers—whether in the United States or Japan—strive to achieve the same end: preventing the spread of infectious disease to those with the highest level of risk. However, as shown above, the approaches that regulators employ to achieve this aim differ significantly. US regulators’ recommendations to introduce mandatory vaccination programs and facilitate inoculation by expanding the role of the pharmacist within the public health system serve as examples.

Since the implementation of Japan’s Preventive Vaccine Law in 1947, changes in US regulations have strongly influenced the formulation of vaccine policies in Japan. As Japanese policy-makers search for ways to improve public health, they are likely to continue to take notice of the US vaccine policy changes, particularly those that have achieved favorable public health outcomes. Yet introducing mandatory vaccination programs or allowing medical professionals other than physicians to provide vaccination outside the traditional hospital setting are not items currently on the Japanese policy agenda and are not likely to become ones. As long as differences exist in the two countries’ medical environment and prevalence of certain diseases, inoculation practices are not likely to converge. 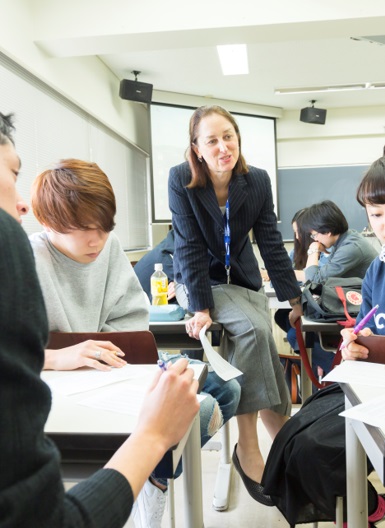 Julia Yongue studied at the University of Tokyo, Graduate School of Arts and Sciences, where she received a PhD in international relations in November 2003. Her dissertation focused on the historical development of the Japanese pharmaceutical industry. In 2006, she joined the faculty of business economics at Hosei University, where she teaches courses on Japanese business history and society. She continues to conduct research on the development of the Japanese pharmaceutical industry, particularly regarding how health policies and regulations influence industrial activities. She has published work on clinical trials, early academia-industry relations, the vaccine industry, etc. Most recently she began exploring the Kampo medicines industry.